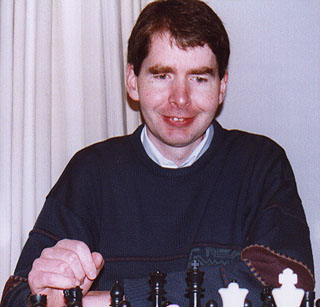 Although born in London I spent only the first 18 months of my life there. My family then moved back to Dublin. Both my parents were Irish and I was the eldest of three children, having two sisters.

Coming from a working class background, most of my formative years were spent in Ballymun where I lived from about age seven to age twenty-four. It was good fun in the early years but when I became a teenager I found that there was little to occupy me. By the time I reached my late teens the place was full of teenagers, all with little or nothing to do. It was around this time that Ballymun began to achieve notoriety for all the wrong reasons (I deny everything!). For the sake of an easy life, I did not make it widely known among my peers that I was interested in chess.

Memories of my early chess-playing career are a bit hazy. I have a vague recollection of starting to play chess in a boxing club located in a basement of the Ballymun flats. I reckon that I was between eight and ten at the time. It is possible that my knowledge of the moves and rules of the game was quite limited. A friend of the family gave me a present of a beginners book on chess which I used to teach myself how to play. The book was very dated even at that time. All the games in the book were from the nineteenth century or the early part of this century. There is no doubt that this book influenced my style of play as demonstrated, for example, by this game against Colm Daly from the 1994 Irish Championships. I was inspired by games such as the Immortal Game (Anderssen-Kieseritzky 1851) and the Evergreen Game (Anderssen-Dufresne 1852) to take up openings like the King's Gambit and the Evans Gambit (my favourite in the early days).

It was always difficult finding opponents. When I was young I probably never had more than one friend at a time that actually knew how to play the game. There was no local club that I knew of. Given these difficulties I didn't play much chess. This changed when I entered secondary school where I could play every Wednesday afternoon during physical education time and I also joined the school chess club. I tended to play board one on the team as I was the strongest player in the school (including teachers and pupils in higher classes). I had a good personal record but our team generally fared badly. To improve my game I needed to learn from people that were better than I was.

In 1977 at about the age of seventeen I joined Ballymun Chess Club. I was aware of the existence of a club in the estate for a couple of years beforehand but it took me some time to find out where and when they played. When I started there I was the youngest player in the club and everyone was able to beat me (much to my annoyance), though this changed after a few months. At first I was not strong enough to make the team but eventually I got my chance. I played my first game on a high board (2 or 3) against Greystones. The team was hammered 5-1 as far as I can remember but I won my game. This was a great boost for me. Over the next couple of years I worked my way up to board one in the club with a rating of 1700+. After holding this level for a year or so I realised that I was not improving so I decided to join a stronger club. This was when I became a member of Kevin Barry Chess Club.

There was a great atmosphere in Kevin Barry during the eighties and this attracted a number top class players such as Colm Barry, Eddie O'Reilly and Tony Doyle as well as several 2000+ players including Clifford O'Connor, Dave Salter, Eric McMahon, Stephen Morris, Padraig O'Tuathail, Ciaran Quinn and Bernard Palmer. The club dominated the Leinster League Division 1. My rating rose above the 2000 mark and I started to win the odd game against top Irish players, such as this one against Philip Short. The great thing about Kevin Barry was that it was more like a social club than a chess club. Nothing would stop me turning up at the club every Wednesday and Saturday night.

In the eighties I was working as an equipment controller for the B&I Shipping Line. This job involved managing the company's fleet of containers, but the future of the organisation looked bleak and I felt that it would be very difficult to get a similar position in another company. Faced with the possibility of the company closing down and being made redundant, I decided to study for a degree in my spare time. For several years from about 1987 to 1992 I played very little chess. Some years I didn't play at all and in other years I played only a hand full of games, but I graduated from Dublin City University with a BSc in Information Technology in October 1992.

A couple of years earlier, in 1990, I got a job as a computer programmer within B&I. I am still working in the same I.T. department although the company is now Irish Ferries Limited (B&I was taken over). I have a keen interest in anything to do with computing and could not imagine myself working in any other field. Fifteen years ago, however, I would have loved to have been good enough to become a professional chess player. I realise now, that unless you are fortunate enough to be rated in the top 100 or 200 in the world, then life as a professional chess player would be a pretty meagre existence.

Kevin Barry Chess Club disbanded in 1992 having won the Armstrong Cup that year for the last time. I played for Elm Mount for the next couple of years, then stopped playing club chess altogether. However just this season (1997/1998) I played in the Armstrong Cup once again, this time for the Public Service Chess Club.

I was not a member of any club when I won the Irish Championship in 1996. Prior to the tournament I had only played 6 games in the previous 8 or 9 months and I was not studying the game at all. Ever since I started playing I have found studying chess to be a rather unpleasant chore and consequently never did much of it. If I got into a routine I could keep the study up for a few weeks but eventually I would be distracted by one thing or another and then would not study for months or even years later. Analysing my own games has never appealed to me much either.

Shortly after the Easter tournament in 1996 I booked leave at work to coincide with the Irish Championships. I had no plans for going on holiday and thought that playing in the Irish might be a useful way to pass the time. At the start of the week prior to the championships I still had not entered and wasn't really in the mood to play but eventually decided to enter anyway. Although I never consider myself to be the sort of person that enters a tournament to make up the numbers, realistically I didn't hold out much hope of finishing in the top six. At the start of the tournament I felt that I would have difficulty holding my rating given that I was out of practice. The field was quite strong and included most of the top players. In the first game against Mel O'Cinneide motivation was a big problem. Fortunately Mel played worse than I did and I came away with the full point. It is always a relief to get one's first point in any strong tournament. When I followed this up with a win against Colm Daly I was in fighting form from then on.

I won the next 3 games and on 5/5 was 1½ points clear of my nearest challenger, Mark Quinn, whom I played in round 6. I had a great opportunity to take the advantage in this game but in a position where I should have gone 2 pieces for a rook up I blundered and went the exchange down. In the next round I blundered again at the end of a gruelling 7-hour game in a totally drawn position against Tom Clarke. Initially I found this loss hard to come to terms with. I managed, however, to keep myself focussed on the goal. I had Stephen Brady under pressure in round 8 but could only manage a draw. This was followed up by a comfortable win in the last round against Gerry O'Connell. Mark faltered towards the end and I ended up equal on points with Colm and Tom but took the title on tie break.

My intention is to play in strong tournaments only from now on, open tournaments in which I might have 3 or 4 very easy games do not appeal to me any more. However, I feel it is unlikely that I will ever achieve another victory in the Irish Championships. Unless my consistency improves I will never be able to join the elite 2200+ group of top Irish players, though I like to think that I will always be a danger to any of them in an individual game. If there are insufficient strong tournaments in Ireland or if the timing of such tournaments does not suit me I would like to play in the occasional tournament abroad. I hope that I can still pull off a few more surprises.