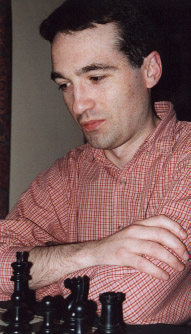 I started chess when I was about ten years old. At least that's what I thought, my parents tell me it may have been even earlier. I went to Newtownpark Chess Club, a local youth club in the Blackrock area of Dublin, which met in a school hall every Wednesday evening.

There was a great buzz about that club, and I used to look forward to Wednesday evenings and the competition of playing in an internal league, or better still playing against another schools team. The club was so popular that eventually a waiting list had to be introduced since space was a limitation - at one point there must have been 60 or 70 of us playing chess, even on table-tennis tables, benches, anywhere we could.

There were some great local people running Newtownpark Chess Club. I learned a lot of good chess tips from Seamus Grace, who used to work with the more promising players. What also helped a lot was the team spirit we had. My younger brother Tim used to play for the team (he's taken up bridge now, but that's another story) and then there were also the Hudson brothers (David and Brian) who eventually fell victim to a different game - soccer. At first our main claim to fame was being able to beat the other chess teams at football, but soon we set about doing this at chess too. My most memorable moments were when my game was the last one left, and everything depended on it. I used to love that. I can honestly say that a lot of my most memorable moments in chess are from my junior days.

For a few years I happily played away on top board for "NTP" as we affectionately called it. Then one Christmas I played in the Leinster U/16 championships, and quite unexpectedly (the top seed was John Joyce and my own rating was very low) won the title! I also went up 400 rating points that year, and from then on I was always one of the leading junior players in the country. I also won the Irish U/16, later on the Leinster U/19. One competition I always regretted not winning was the Irish U/19, although ironically in my last U/19 year I did manage to win the Leinster Senior Championships, which was a much tougher event. However I did play top board for Ireland in the Glorney cup in Swansea 1986 (including a memorable game against Michael Adams). The Irish Junior scene in those days was very competitive, and it was quite normal for the whole of the Glorney cup team to be rated above 2000.

Although I was one of the top Irish players throughout the early 1990's I never really fulfilled my earlier promise. I won a few weekend tournaments every year, but there was always something else missing. This was a bit frustrating, as I knew in my heart that I should be doing better. The turning point came in the European Team Championships held in Pula 1997. This was the event which finally gave me the mental toughness to make the next step. Throughout the event I was playing good chess, up to a point, but bad mistakes towards the end of the games were costing me points. True enough, I was playing very strong players, but I realised then that I was as good a player as most of them. It was only a remarkable tendency towards tragi-comic mistakes, perhaps stemming from a lack of self-belief, or mental stamina, which was holding me back.

One of my favourite and most memorable games is the one I played against the player from Azerbaijan in the penultimate round of this event. I was on a rotten score going into this round, having just lost a game against a Portuguese IM through trying too hard to win (in fact I had managed to find the only way to lose the game). I felt the way I was playing I really deserved to be on a much higher score, and I went into this game against Azerbaijan in very confident mood having told the rest of the Irish team that I was going to win. I remember Colm Daly at the dinner table being a bit sceptical about this - "just try not to lose, like you have been doing", but for me the game against Portugal had been the final straw and I had a point to prove. In the end I played an inspired game. Throughout the tournament Colm kept looking in the daily bulletin to see if any of his games were given a diagram. The following day my game against Azerbaijan was given two diagrams! In the final round I drew very comfortably with the Black pieces, and this resurgence gave me the confidence and assurance to return to Ireland and win all of the weekend tournaments leading up to the Irish, and then to win the 1997 itself on a score of 8½/9. So this game I played against Azerbaijan was not only a very good one, but also a very important one for me, and marked a big turning point in my chess and in my self-belief.

Of course this was a dream come true for me. I always knew in my heart and soul that some day I would win the national championships, since by the law of averages I had to win it sometime, but to be honest I was getting a bit worried as the years went by and I still hadn't done it. To win it on a record score of 8½/9 was more than I could have dreamed of. Both Stephen Brady's and Colm Daly's scores (8 and 7 respectively) would normally have been enough to win outright, but not that year! I drew with Stephen on the black side of a French defence in round two, and won all of my other games, to turn in a 2600+ performance. Normally this would have been good enough to have wrapped up the title with a couple of rounds to spare, but Stephen was also playing remarkably well that year, and going into the final round we were both on 7.5/8. It was my old club mate from Dun Laoire, Tony Fox, who finally put a stop to Stephen's run by holding him to a draw in the last round, which meant that I had won the title outright. I felt a bit sorry for Stephen, but then, as people reminded me, he had already won the Irish twice, and this was my year. It was a great feeling to finally win the title, having come close on a number of occasions, and one that I will never forget.

I've always been a very tenacious player, and aim to make sure that if somebody does manage to beat me they will have had to work very hard to get the result. Basically I have positional tendencies in my play, but on the other hand have never been averse to tactical play if that is what's required. Over the years I've managed to win a number of spectacular games, as well as the more low profile positional victories, which as everybody knows are the "bread and butter" games of every chess player. I think it works to my advantage that a lot of people view me as a positional player, because then when I sacrifice a piece they are all the more surprised! 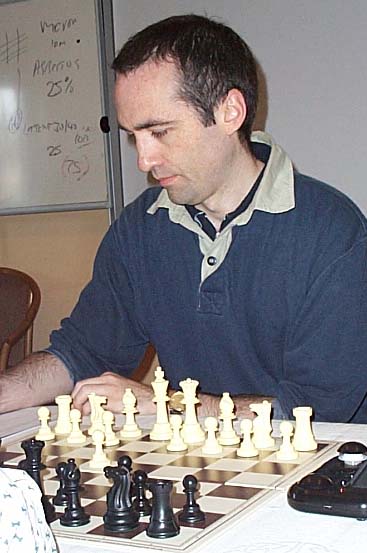 I don't think that I'll ever stop playing chess. I enjoy it too much. OK, at times it can be hard work, but the buzz I get from playing is something special. At the moment I am trying to play at least one international tournament each year. I can honestly say that I am playing the best chess I have ever played at the moment, and it is a pity I don't have the time to play in more international events. I find that when I do go abroad it takes me about five or six rounds to really start playing at my best. This is a problem I think a lot of Irish players must have. We are not professional players, so when we play abroad we are coming in "cold" so to speak, and playing against IM's and GM's who have most likely only just finished playing in an earlier event.

Even so, I'm finding that I can compete on a fairly even level with most IMs and GMs who are on the tournament scene at the moment. There aren't many who can outplay me, and I think because of this it is only a question of time before I achieve some spectacular results on the international scene. I am still as ambitious as ever, but now I am a far more mature and rounded player, and I think my future in chess is very promising at the moment. I've never felt this confident and relaxed about my game before, and I'm already looking forward to my next tournament!