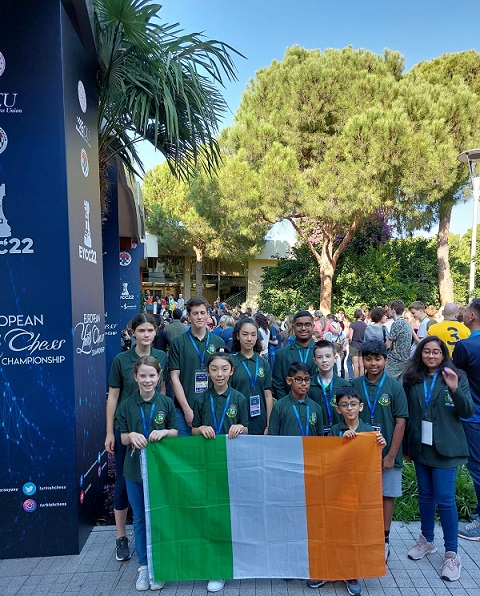 This year’s European Youth Championship is held in Antalya, Turkey, 5.-14.11.

Irish delegation is one of the biggest ever with 11 participants, including as much as 5 girls, also one of the highest numbers in the recent history.

In our group we have experienced participants of such events, playing in older groups – Tarun U18, Trisha G18, Leon U18, Lara G16 and Kavin U14. But it is a huge pleasure to have six players here participating in the live European championship first time ever: Yannick U12, Bedhbh G12, Nemhain G12, Vivaan U10 and the youngest ones, Samarth U8 & Lorena G8. All arrived safely, very good transfer arrangements by the organisers.

The venue is a 2400sqm hall, one of the best I have seen – enough room for everyone. The all-inclusive Pine Beach hotel we’re located in is fantastic, with brilliant service and better choice of food. Pools are all around, see less than a 100m from the hotel, temperature of both air and see above 20 degrees.

Day 1 – November 6th The day started with the Technical meeting, focused much on strict anti-cheating measures. Not sure I have ever seen so many controls around the venue. But then again, this is much more relaxed on tournament events in Ireland. Organisers are even taking care about the youngest players, securing they hand each of them over after the game to the responsible parent or coach. Top 10 boards will be live in each category.

In Round 1, we have one player getting a bye, Vivaan – no FIDE rating + V in alphabet being the reason. It didn’t start great, the first 3 games that ended we lost, with Lorena, Samarth & Yannick respectively. In his debut, Yannick played a 3rd seed with a rating almost 500 points above him, but he put up a great fight altogether.

Kavin won as expected, bringing the first point. The others kept playing for more than 3 hours. The unrated sisters Doolin played against 1400+ rated Turkish opponents, even when most of the G12 games were finished. Bedhbh had only 2 pawns exchanged after 2,5 hours – but was outplayed in the last hour. Nemhain, after a wild exchange, entered an opposite colour bishop ending and drew. With a bit more experience, they could have both gotten more – but great first games!

Trisha looked like she was heading towards time trouble but won. Tarun’s opponent has been more resilient than his 2125 rating suggested, and a draw was agreed. Lara won her game also.

Leon played as black vs an FM with a rating 450+ points above him in an interesting Tarrasch game. They got into a wild Q+R vs Q+B+ 2 advanced pawns ending which was winning for Leon – but he accepted a draw having only 3 seconds left on the clock!

If yesterday was a good day for our team, today was a great one! The youngest ones were the first to finish. Samarth lost to a strong opponent in U8. Then Lorena won in U8 Girls with a beautiful mate. Can you find it in the diagram? 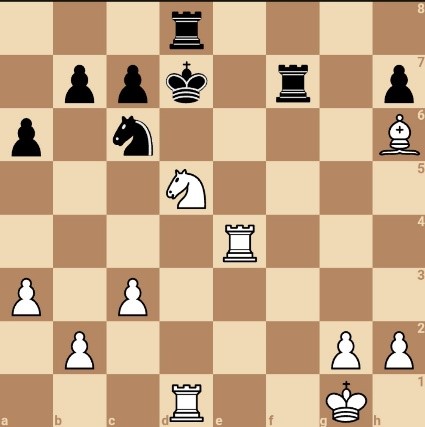 Nb6# is the move – discovered check, double check, and checkmate! Yannick also got his first victory today, after nicely exploiting opponent’s too open king. Bedhbh won her first game, after keeping a pawn on g7 (as white) for most of the game! Tarun & Nemhain got another draw and stayed undefeated, Nemhain after playing a perfect endgame with a piece down. Vivaan & Leon have put up a great fight but lost to much higher rated opponents.

Kavin and Trisha were better the whole game and routinely converted. Lara lost a pawn early on, but then managed to imprison opponent’s queen on h5 while launching a pawn kingside attack and won easily afterwards. Anyhow, 7/11 is a fantastic score today, and we know things are going to get tougher tomorrow. Today our prep included beach volleyball, tomorrow’s plan is early morning yoga and some sea swimming (the water temperature is 20˚+, it seems).

Day 3 As expected, a very tough day – and we got only two points out of 11 games. Kavin is still on 100%, which is brilliant – winning a tough game against an opponent outrating him by 200 rating points. Yannick continues with great performances. Today he drew against the 5th seed, after a game he had more winning chances than the opponent. Tarun added another draw. In the morning before, we had good fun with some sea swimming. A few went for Aqua gymnastics also. On Day 4, you can follow Kavin & Trisha on live boards.

Day 4 The best part of the day was aqua park in the morning, with lots of fun we had on water slides. On the result side it was another tough day, with 3.5 points achieved. Samarth got his first win, in an endgame of B+4 vs 6 pawns. Bedhbh won, and Trisha got back to winning. Tarun added another draw. On Day 5, Kavin and Trisha will be on live boards.

Highlight on the fun side was swimming with the dolphins, that some families went for. 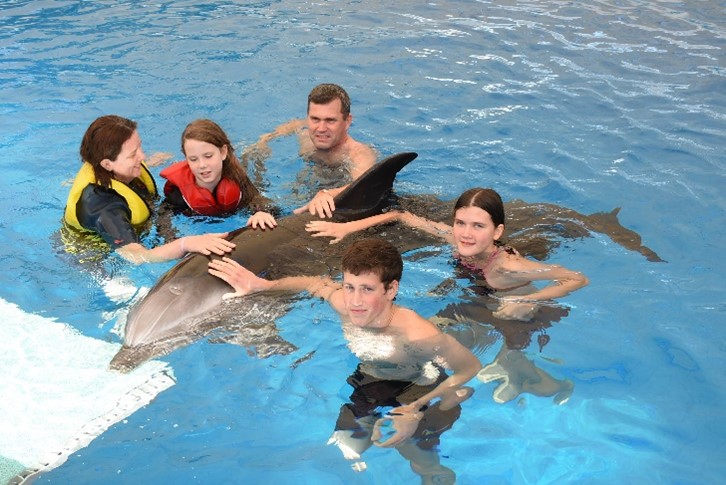 Better days for our juniors, with 6.5 and 4.5 points respectively.

On Day 5, Vivaan got his first draw, and Nemhain, Leon & Tarun their first wins. Yannick continued his strong performance with another win, and Kavin & Trisha on live boards also won, fighting for top places now. On Day 6, Samarth brought another win, forcing the opponent to give his queen after some great play with his bishop pair already in the opening.

In U18, Tarun won again and is undefeated after 6 rounds, now with 4 points. Leon drew. Bedhbh won again and is now at 3/6, 50% on hir first championship! Trisha with another win, is fighting for the very top and is currently 3rd in rankings. On Day 7, Tarun & Trisha on live boards.

Day 7, 8 & 9 Last few days went quickly, especially with the last round being played in the morning. We did manage to have some fun altogether on the last evening and celebrate Yannick’s birthday (big thanks to Sandra for organizing): 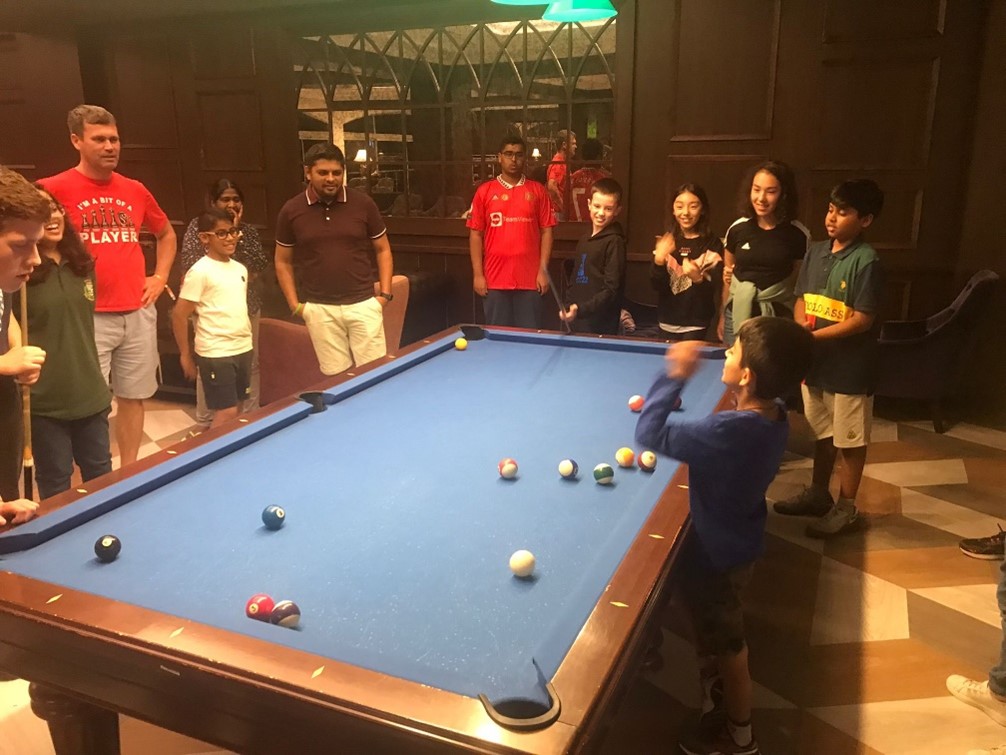 What is great is that all our players recorded at least one win, and all ended at 2.5 points or above! Our star was Trisha, who got 6.5 points and so ended at phenomenal, shared 3rd place! 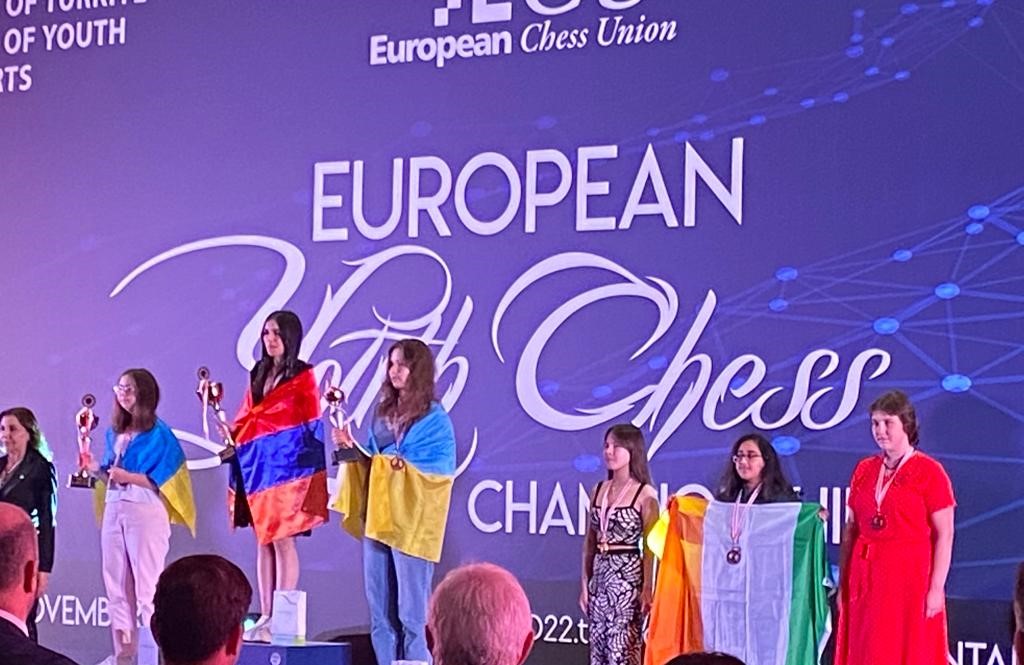 Kavin also had a great tournament, playing many games on top boards. He ended 14th with 6 points.

In their 1st EYCC, Bedhbh Doolin and Yannick Woods got a great result with 4 points, leading our groups in younger categories.

This was an amazing experience, and thanks to all who participated.

I think all had some great fun. Event itself was one of the best organized we have ever seen – great location (& weather), great food, and so many things to do.