The Irish Chess scene has long awaiting the return of the jewel in the crown of Irish Chess calendar, The Kilkenny Congress and after a 3 year break, it finally returned, and what a return it was. A new record was set for total numbers, well over 250 players gathered in both the Club House and Ormonde Hotels to battle for the 4 titles at stake, not to mention the not insignificant prize fund too. 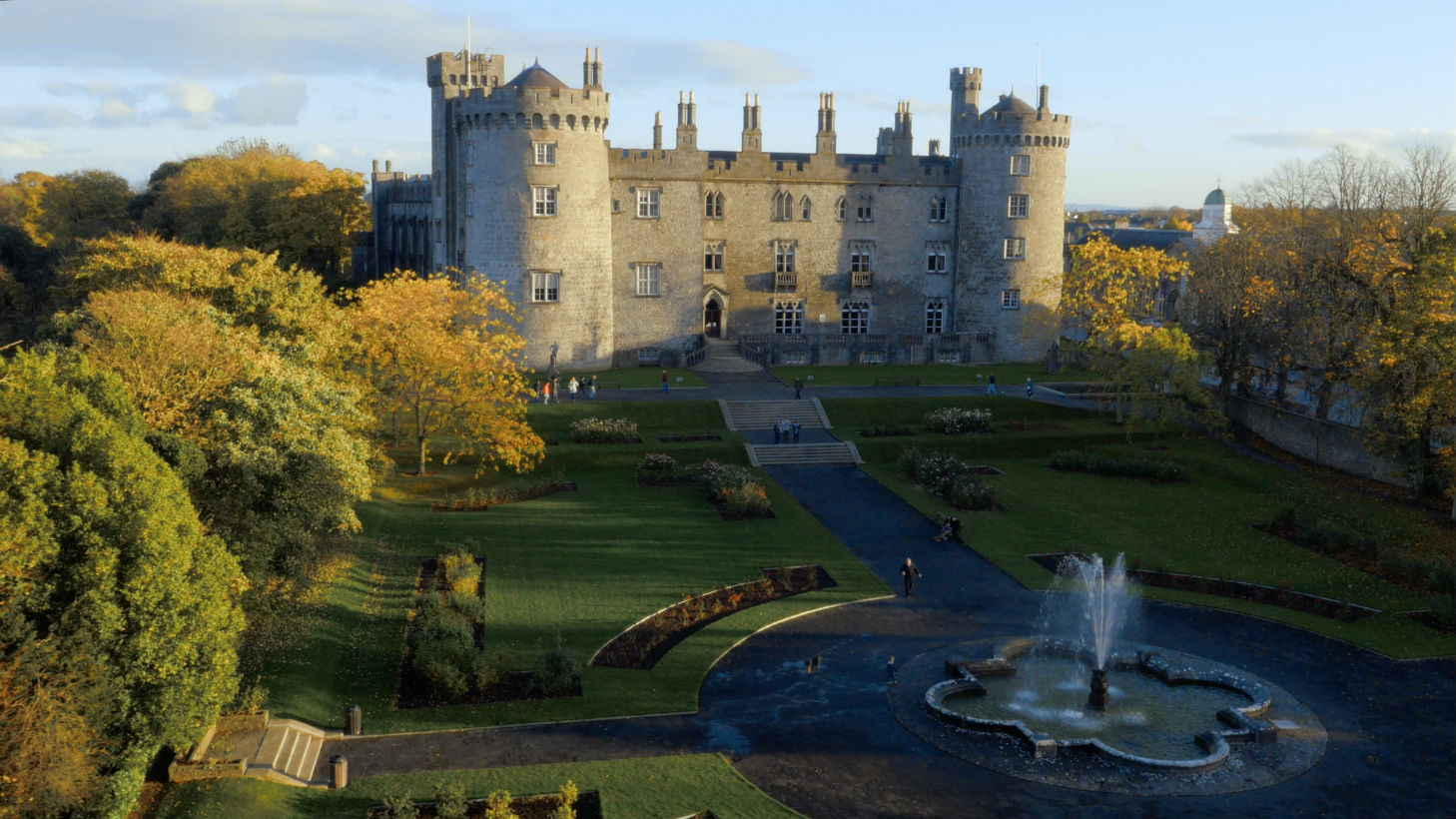 Kilkenny wouldn't be Kilkenny these days without the customary French invasion, lead yet again by the travelling trio of Sebastien Maze, Matthieu Cornette and Fabien Libiszewski, grandmasters all. I'm not sure how many times these three have played the Kilkenny Masters but it's more than a lot of the leading Irish players!

The other 3 grandmasters playing were Bogdan Lalic, England, Matthew Turer, Scotland and our own Alexander Baburin. Alex has lived here since 1993 and unlike our French trio mentioned above, he's yet to develop a taste for the Guinness. 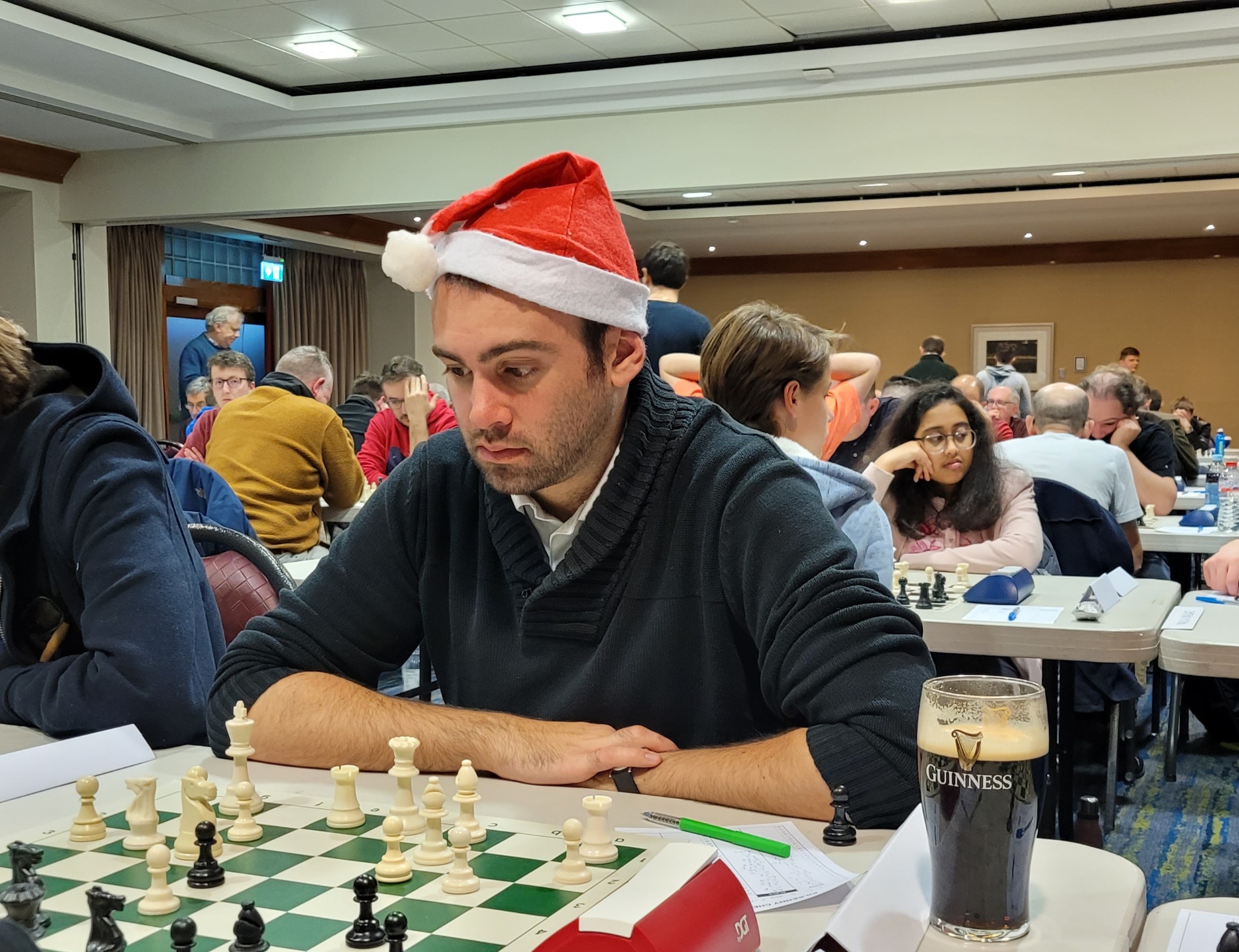 Another part of the French invasion was Emile Roubert who, pictured left from his first round game against Matthew Turner, was certainly getting into the "spirit" in every way!

In all, 36 players entered the Masters and, as usual, the first round pitted the top half against the bottom half of the draw. Not all went to seeding though, local player, Adam Collins held our very strong IM, Artur Davtyan to a draw on board 4, and by some accounts, stood far better at one stage. You can see that game here.

Alex Baburin was held to a draw too by his own student, Ben Sheahan while there were a few other draws, none of the "top seeds" lost a game.

Tarun's tough round 1 victory over Martin Wessels earned him a crack at our top seed, Sebastien Maze on Saturday morning and you can see that game here, Sebastien proved just a bit too strong for Tarun on this occasion. On board two we saw the meeting of Matthieu Cornette and Mark Heidenfeld and this was very well contested affair which can be viewed here, it features an interesting queen and minor piece ending.

The board 3 encounter between David Fitzsimons and Bogdan Lalic was agreed drawn before I'd finished my breakfast, while Matthew Turner was playing our women's national champion on board 4. Ultimately, Matthew proved too strong for Trisha and he reached 2/2 along with many others. 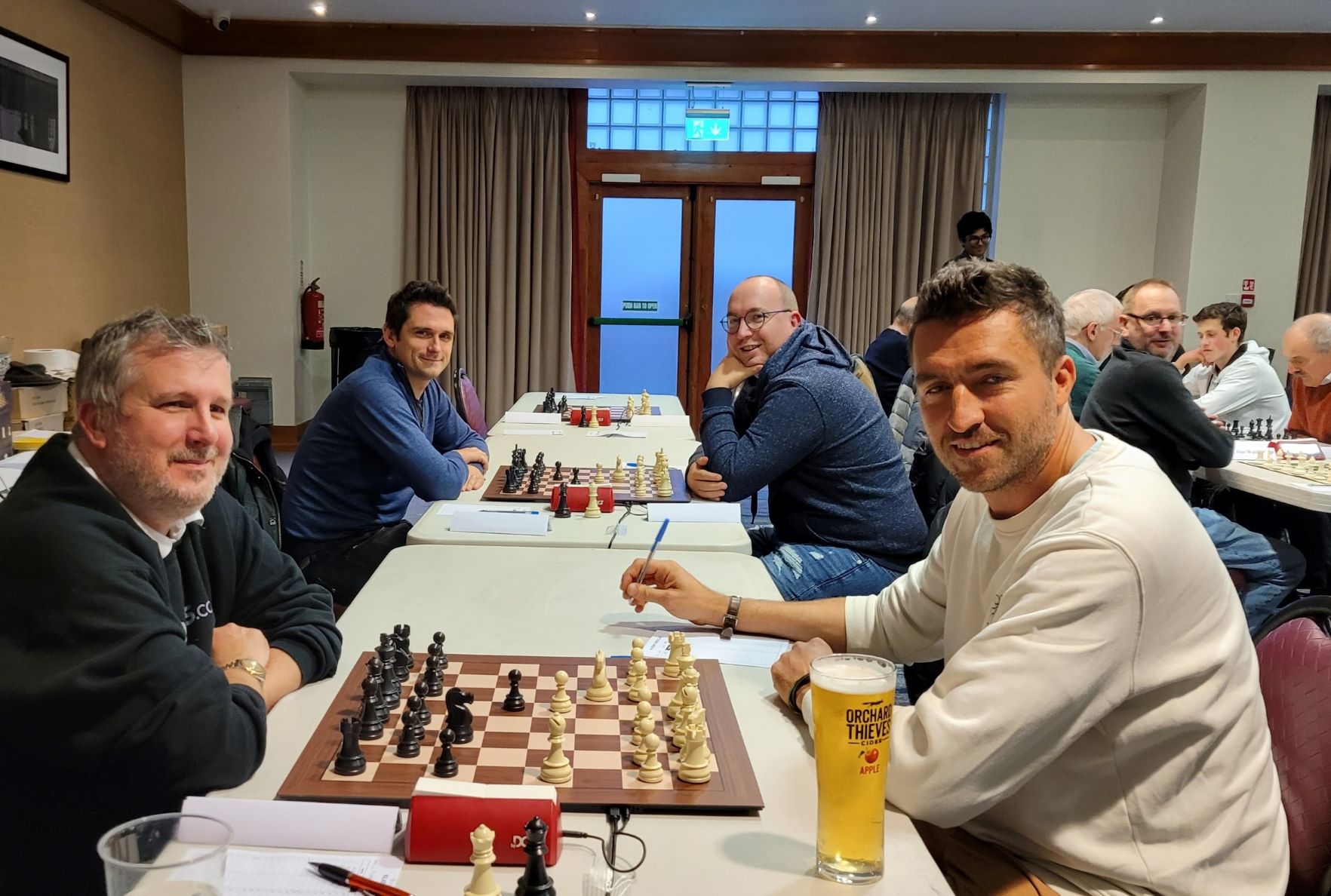 While I was doing the draws for round 3, Maurice Buckley told me a little story about a coincidence in the Challengers during round 1. He had a re-pairing to do when it was found that boards 17 and 47 were both without an opponent and so, after the prescribed time had elapsed, Maurice re-paired the two players from those boards to play each other. Wouldn't you know it, the two players were father and daughter, Eid and Eve Bourached! Eid's son, Anthony is featured in the Rogues Gallery below, he's the "Photo-Bomber".

Round 3 began on Saturday afternoon and while many players were keeping an eye on the World Cup, none took a bye to watch it, at least not officially.

Here we began to see our first all-grandmaster clashes as Sebastien Maze was white against Matthew Turner and we had the all French clash on board 2 of Fabien Libiszewski vs Matthieu Cornette. These games began at 2:30pm and at 4:00pm, France were playing Denmark in the World Cup, no surprise then that the board 2 clash didn't last much longer than it took me to write this sentence. I did manage to get this photo on the right though, before the went to the bar! Sebastien obviously knew he was not in for a quick draw, you can see his pint on the table! This game was no prearranged short draw but it wasn't a titanic struggle either.

On board 3 Bogdan Lalic moved to 2.5 / 3 with a win over Killian Delaney, a game I don't have, I'm afraid. The board 4 clash of Alex Baburin and Artur Davtyan resulted in a win for Artur, which can be seen here. This left the top boards for round 4 of this years' Kilkenny Masters looking like this. 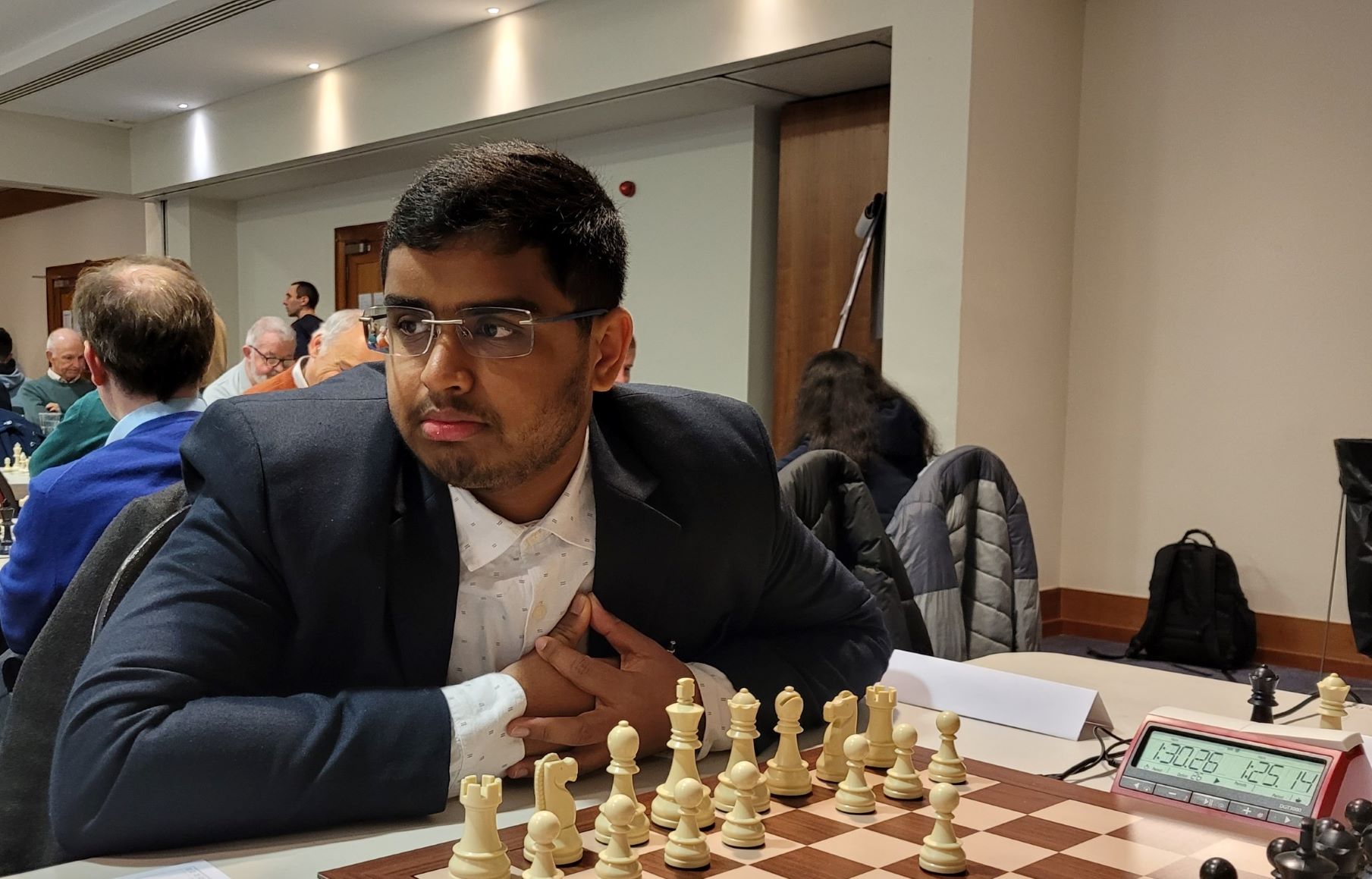 The eagle eyed among you will have noticed that all 6 players were on the same score and they were the only ones on that score in the event, so an exciting 4th round was hoped for. A win for any player in the 4th round would be very significant.

By the way, on board 4, Tarun Kanyamarala was white against Mark Heidenfeld, both on 2 while on board 5, David Fitzsimons was white against Trisha Kanyamarala, both also on 2 so wins here would also be very important. Tarun, pictured left, is Ireland's youngest and latest international master.

Board 3 was a fairly early draw, while the two boards either side of it were much longer affairs. The first of these to finish (at 10:30pm) was board 2 and this game featured a fascinating bishop of opposite colour ending, this game is well worth going through carefully. Boards 4 and 5 both finished about 10 minutes later, with David Fitzsimons beating Trisha Kanyamalara while her brother, Tarun beat Mark Heidenfeld. In the meantime, the last game to finish was the top clash on the top board, it went all the way to move 69, Sebastien fighting hard but it was the IM from Armenia who gained the full point in this game.

Play began promptly at 9:15am on Sunday morning (on most boards, some started a wee bit later) and board 2 was a 14 move draw. A win for either player on board 1 would put them in a very strong position to win the event but a draw was also agreed here, though not a very short one. Board 3 was a different matter, this was an exciting game which was played on board 3, which should have been a "live" board but it decided it didn't want to work this weekend. David Fitzsimons graciously gave me the game afterwards, it was a pleasing looking finish for Fabien.

With round 5 wins for Sebastien and Bogdan, this left the final pairings looking like this. 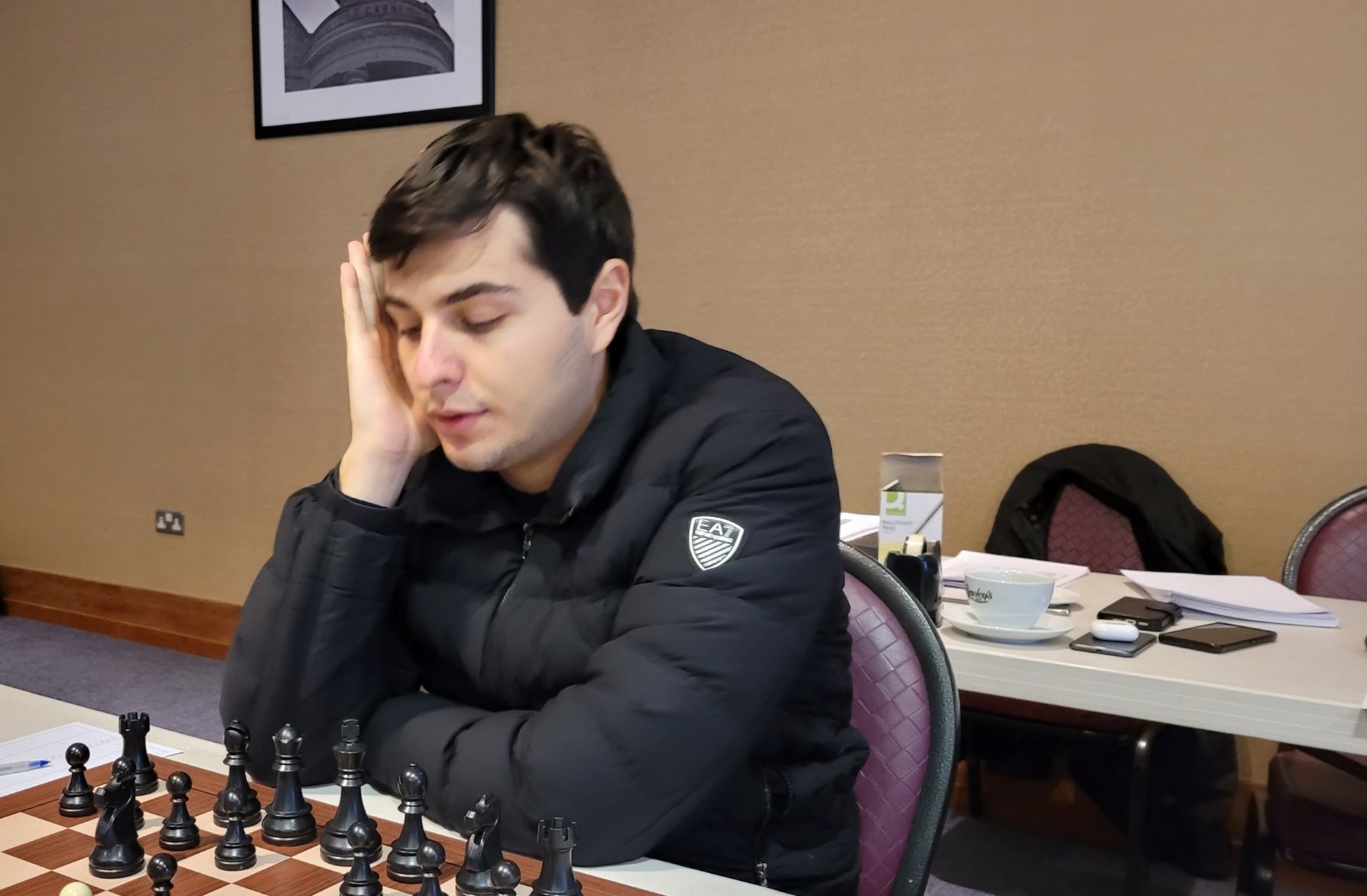 Play for the final round began at 1:45 and again, there were fairly quick draws on boards 1 and 2, leaving the fighting to get into the larger prize fund on boards 3 and 4. Matthew Turner had white against Alex Baburin on board 4 and this ended in a hard fought draw.

The board 3 encounter featured Bogdan against Tarun and it was Bogdan's experience which netted him the full point and earned him a share of 1st prize.

Pictured right is one of the other joint winners of this year's Masters, Artur Davtyan IM who's only 21 years old, surely the GM title can't be far away for this young man. Let's hope we see him coming back to Ireland again to play in this and other events.

Just in case the reader thinks that "brilliances" are only played in the Masters, here's a game with a very pleasing finish from the Major, won by Henk de Jonge, who's pictured below in our Rogues Gallery.

Speaking of the Rogues Gallery, the last player featured in that below is Bram Van Dijk and I watched most of his last game against Adam Collins this afternoon, and I have to say that I was very impressed. Here is that game and it's well worth a look, it features a nice piece sacrifice.

If you're a prize winner, please contact Maurice Buckley with your IBAN information at [email protected] 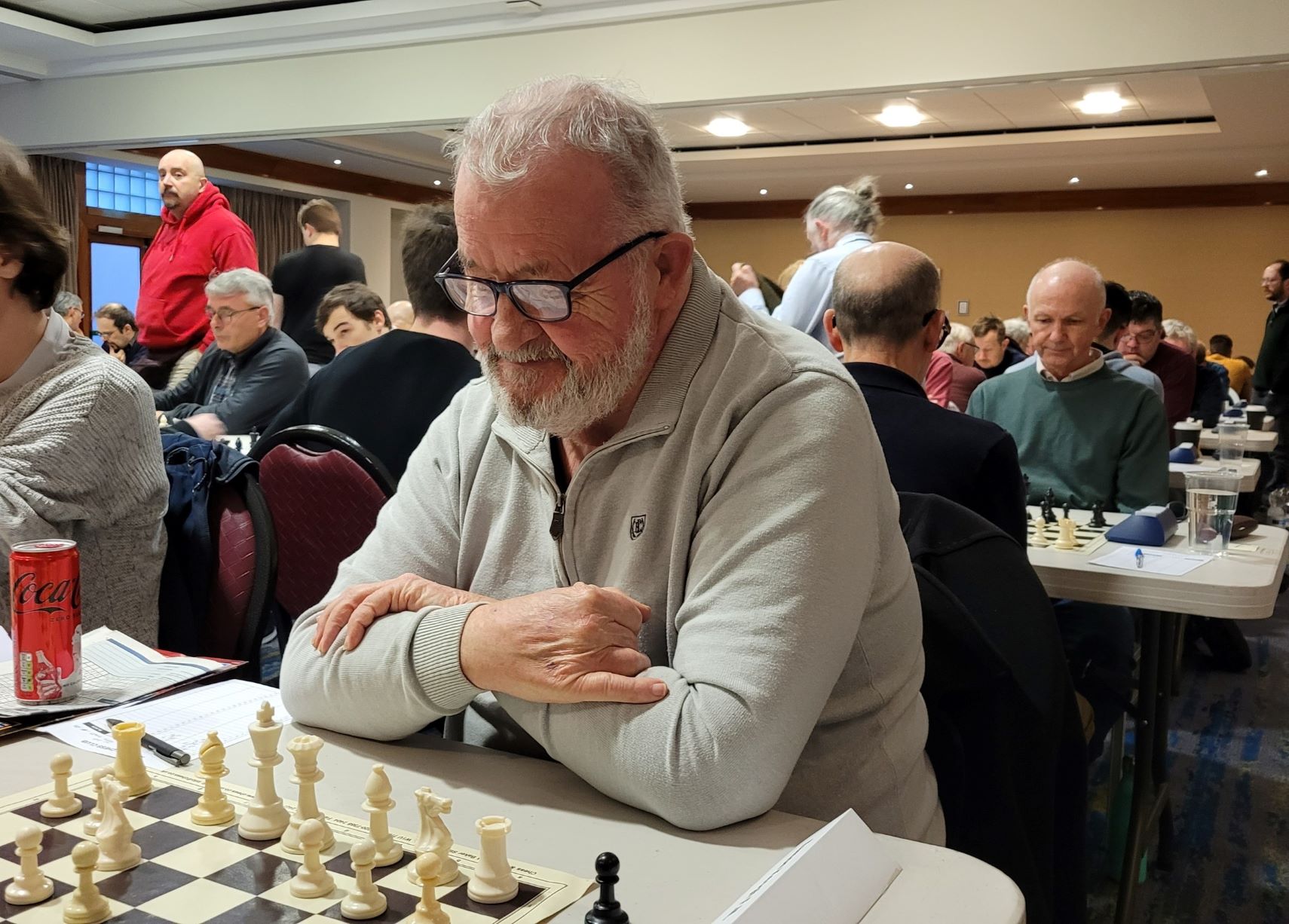 At the opening ceremony, our host, Jack Lowry told us that there are 3 stages in a man's life, 1. Youth 2. Adulthood and 3. "You're looking good". No one can deny that Eamon Keogh is looking really good on his return to Kilkenny! 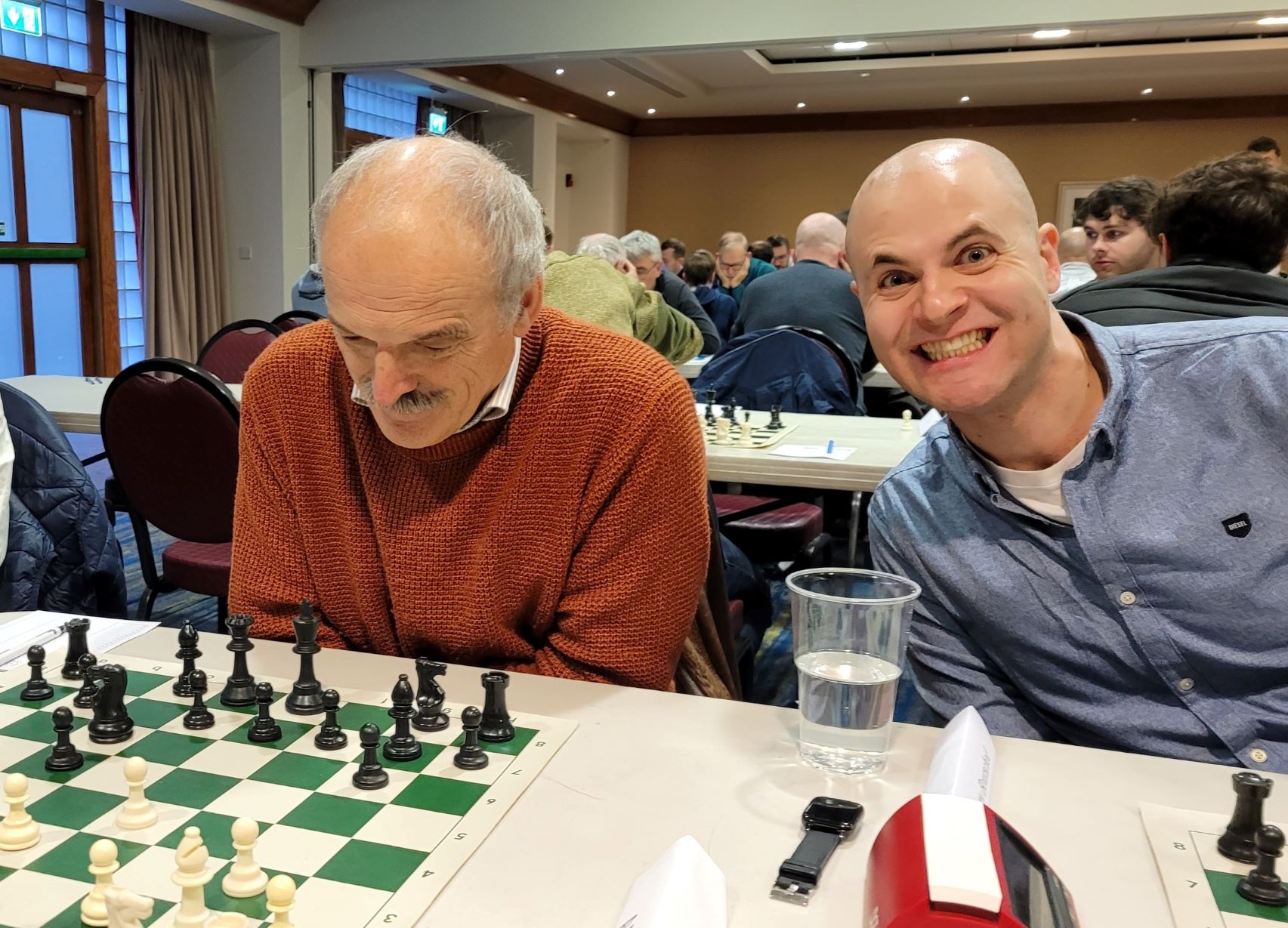 I like to call this image "The Photo-Bomber" The intended subject is Paul Wallace, the "intruder" is Anthony Bourached 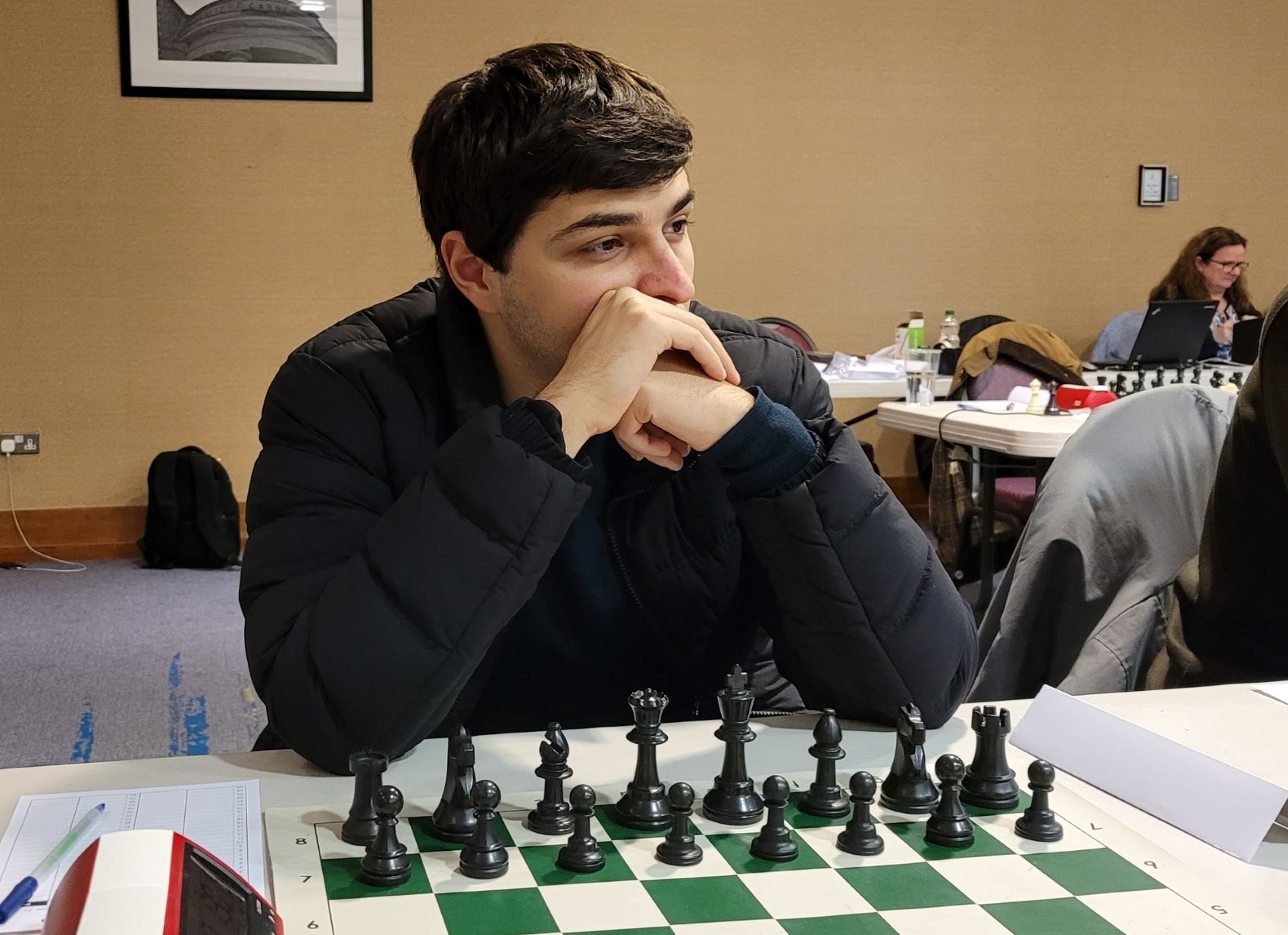 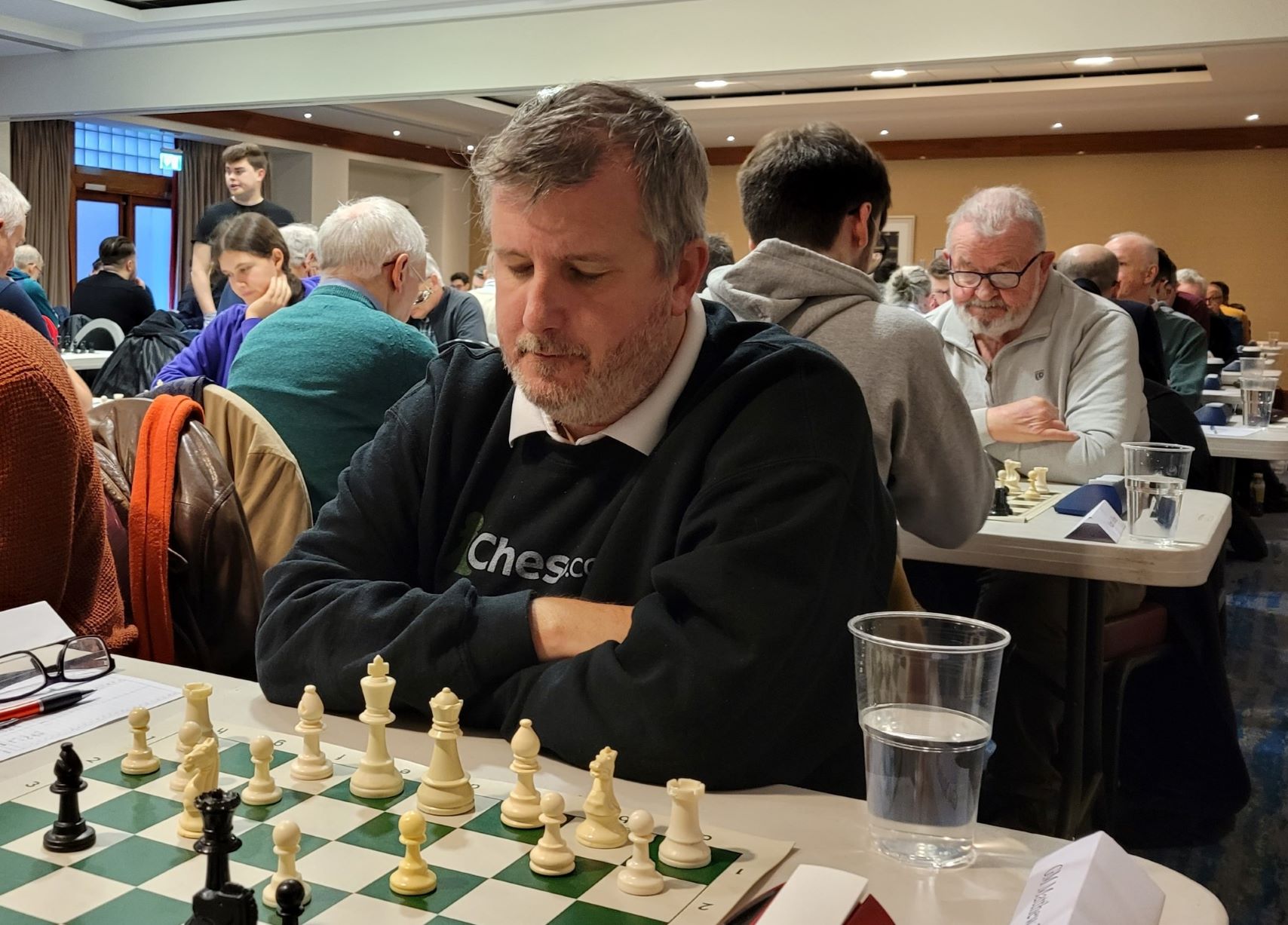 Scottish GM Matthew Turner has played the Kilkenny Masters before, I think, and I suspect he'll be back for more. 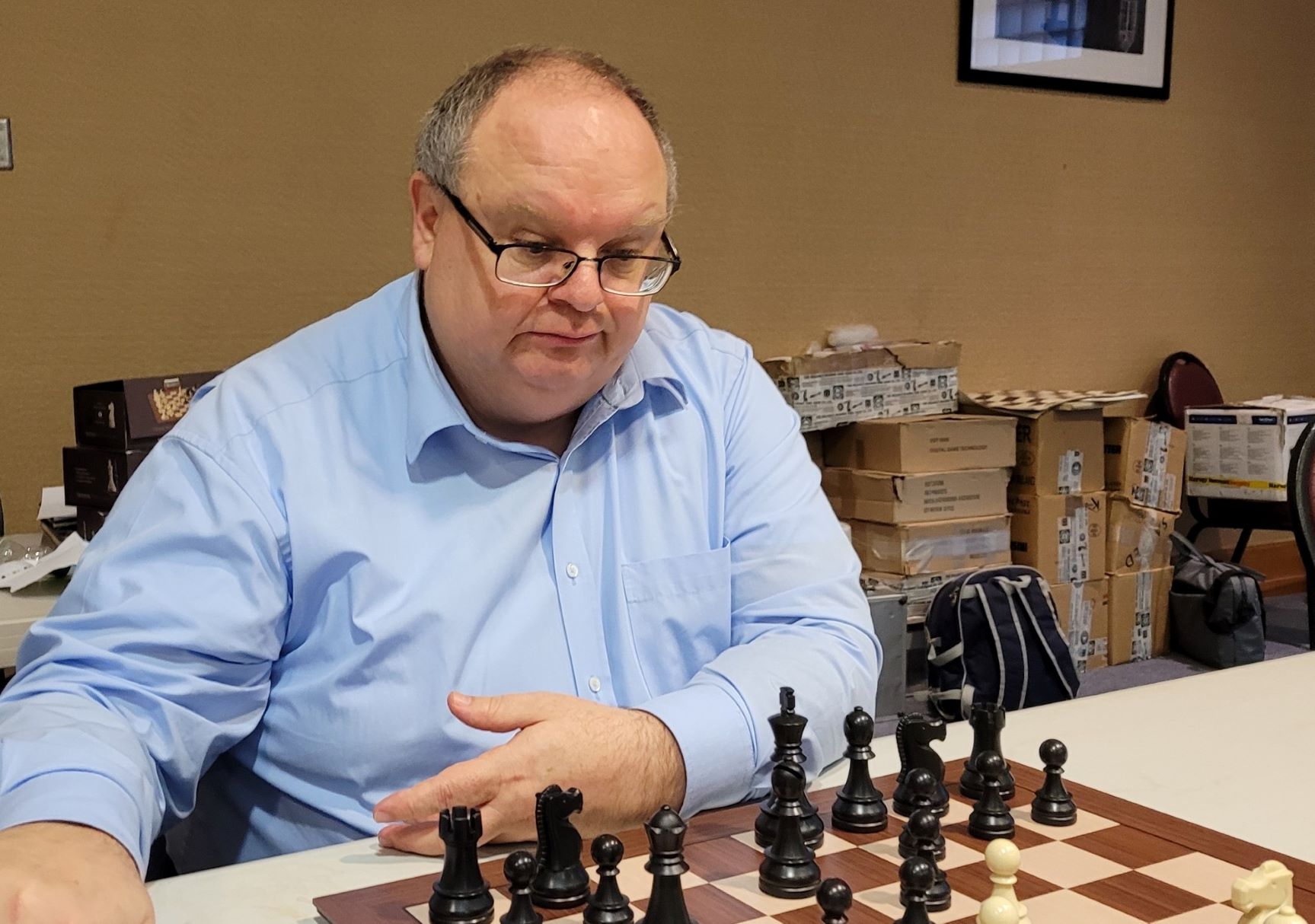 Mark Heidenfeld IM has been Irish Champion, as his father before him was many times, Mark is a regular visitor to the top Irish events. 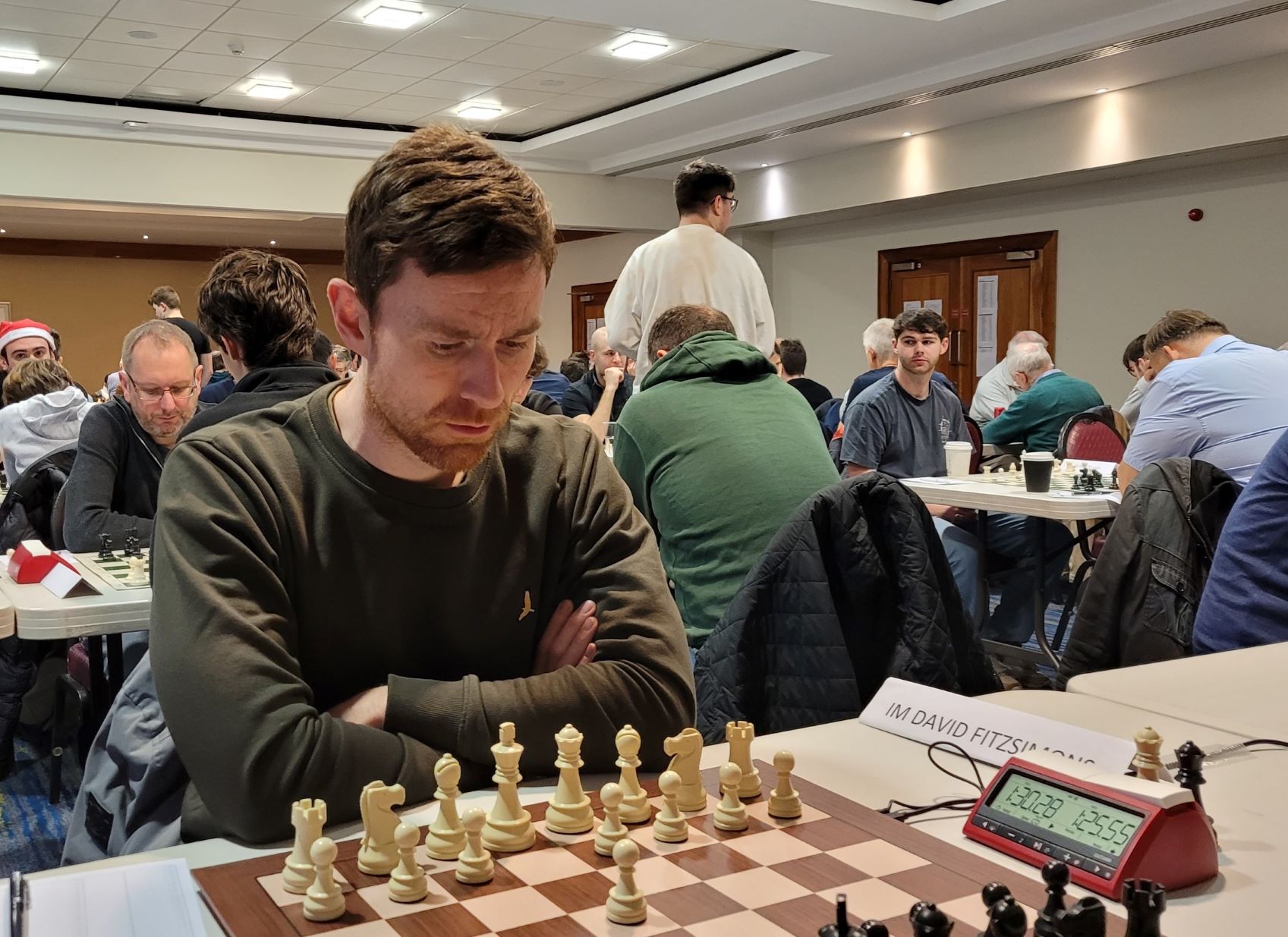 David Fitzsimons IM who, until recently was Ireland's youngest IM. 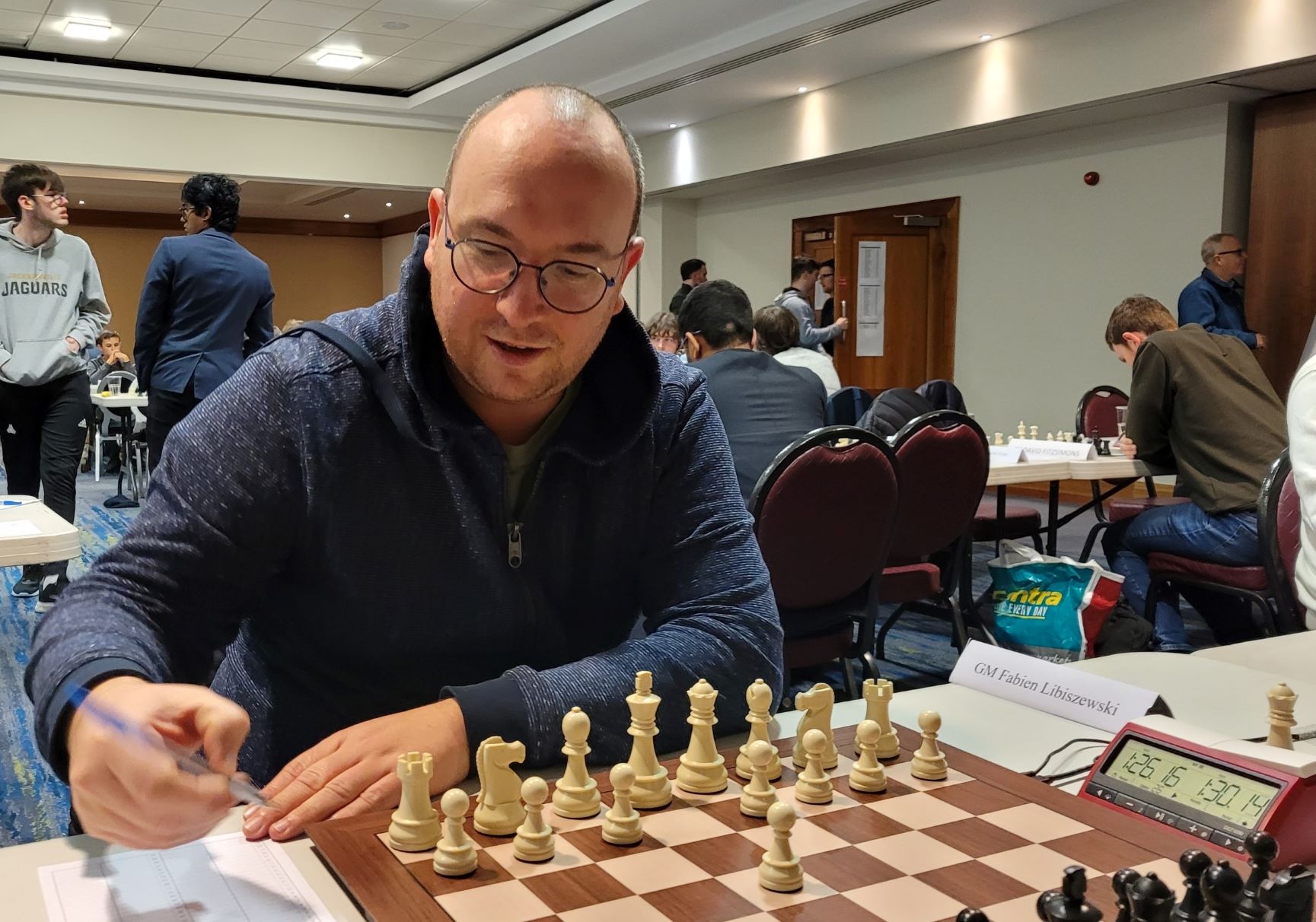 A central part of the regular French "attack" on Kilkenny, Fabien Libiszewski GM. Both he and Sebastien Maze visited Kilkenny many times but for me, one year in particular stands out, 2011 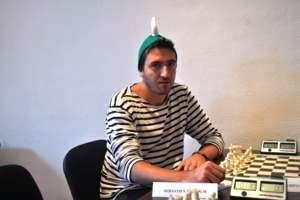 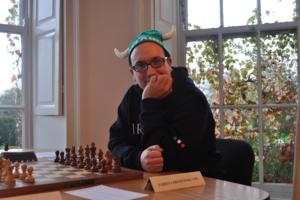 Fabien and Sebastien from Kilkenny 2011, the players were younger and phone cameras were not as good!

Sebastien came 4th in the Masters that year, behind the winner, Gawain Jones. Joint 2nd to 5th were Ivan Cheparinov, Mark Hebden, our Sebastien and our Alex Baburin!

Fabien was placed 9th overall, but if I remember correctly, this event was on at the same time as the 6 Nations clash between Ireland and France, and I think our French GMs interests were not entirely on the Chess! 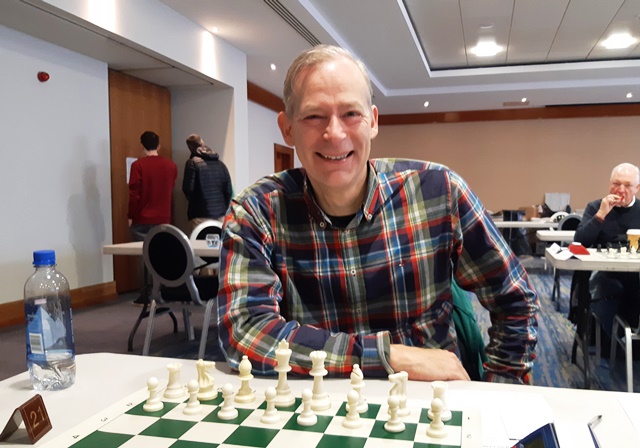 Henk De Jonge, a member of the Cork Chess Club and the winner of the only game from the Major published above, nice finish Henk. 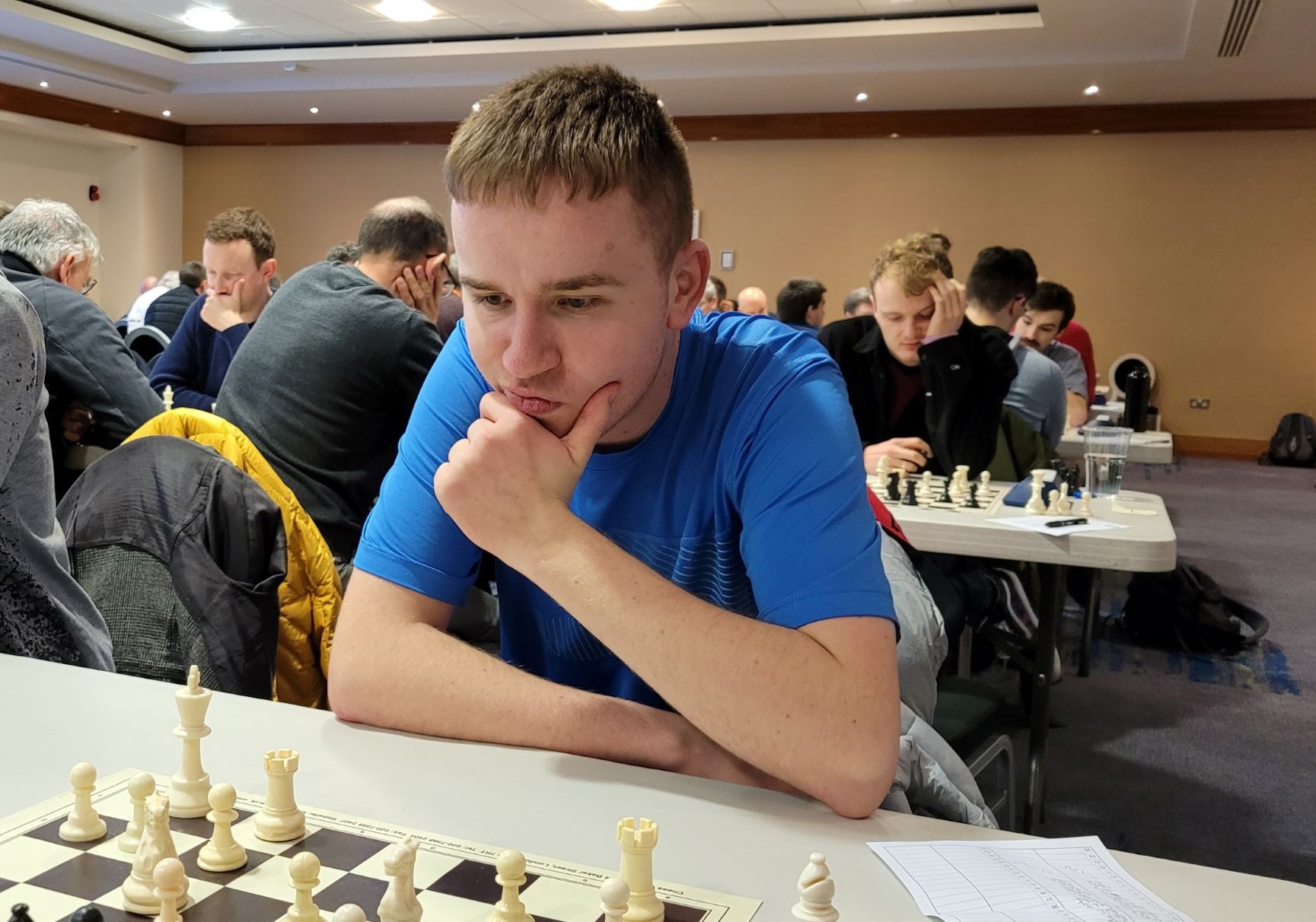 One of the joint winners of the Major, James Kavanagh, obviously in deep thought here, shhhh! 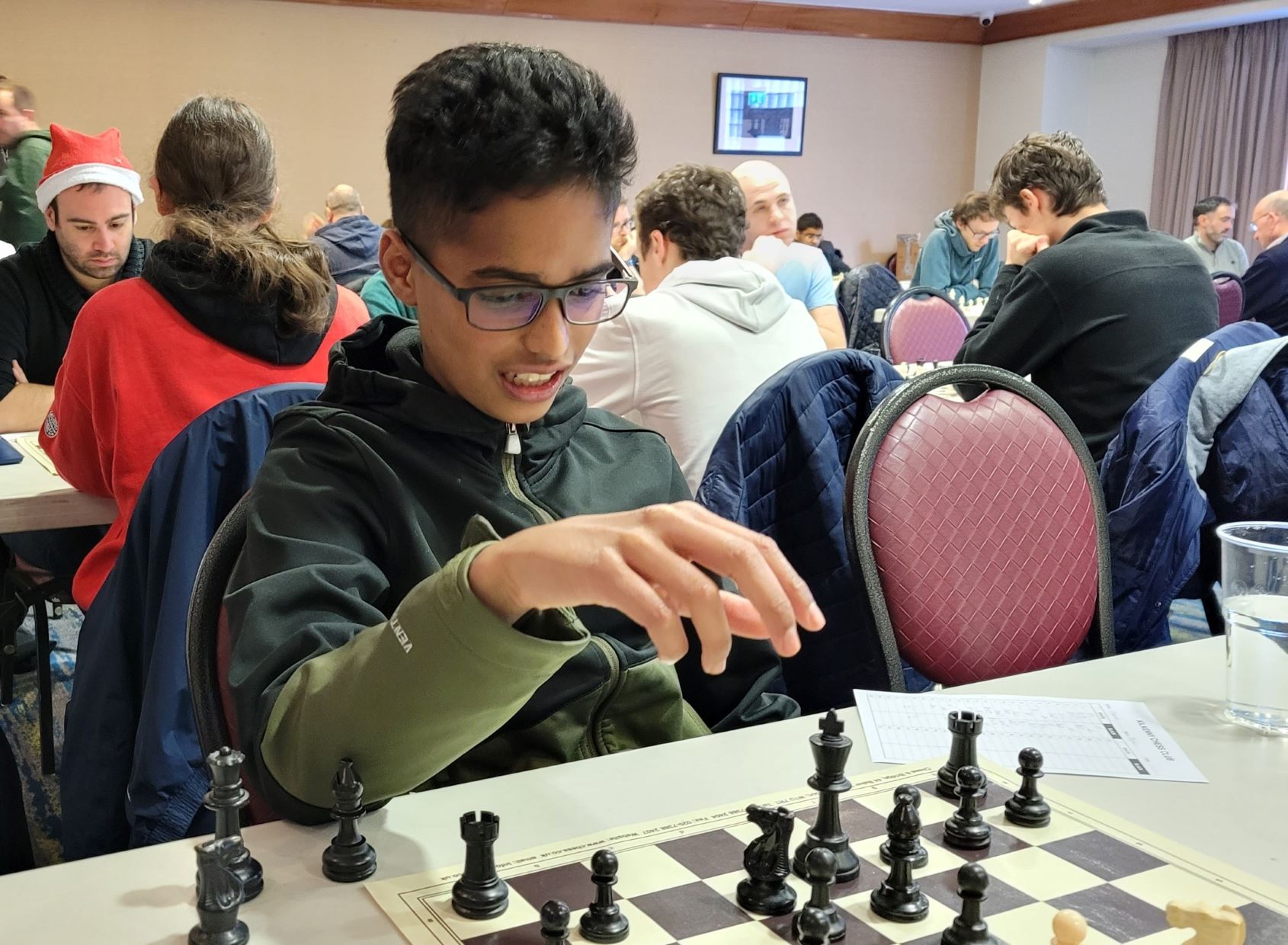 One of the other joint winners of the Major, Rafael Renji of the local Kilkenny Chess Club, he just looks really happy, this was taken after he knew he was joint first! 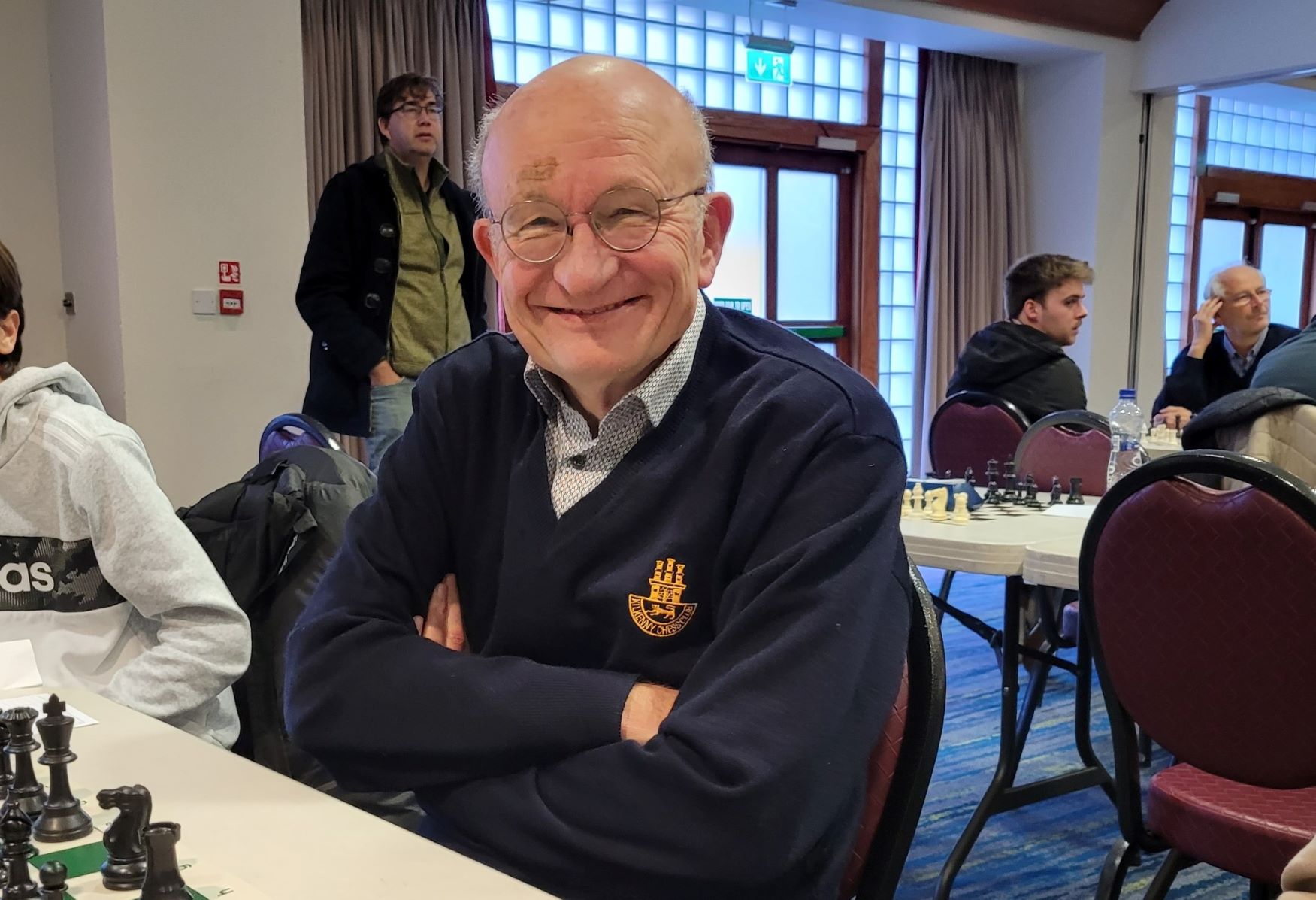 Last, but certainly not least, this is a very regular visitor to the Kilkenny Masters for as long as I can remember, Bram Van Dijk from The Neterlands. As you can see, Bram is happy sporting his Kilkenny jumper, and why wouldn't he be, he scored an impressive 3.5 in this field!